Overview: New York City’s plan to switch the health insurance plan of retired government workers from traditional public Medicare to a private Medicare Advantage plan will create a two-class health system for retirees. Higher-income retirees, who are predominantly white, will be able to stay in a comprehensive public Medicare program by purchasing supplemental coverage. Lower-income retirees, predominantly people of color, will be placed in a private Medicare Advantage plan with limited choice of physicians and hospitals, requirements for prior insurance company authorization of treatments, and higher out-of-pocket expenses. Total spending on retiree health services in the Medicare Advantage plan will be as much as 24% below what is now spent on their care.

The City’s proposal will increase the vast disparities in health and health care access across race and ethnicity revealed during the past year in the COVID-19 pandemic. Eight years ago, then-candidate de Blasio promised to end the ‘Tale of Two Cities.’ Now, as he leaves office, he is creating a two-class system of health care for the City’s workforce. He should withdraw his plan. The Mayor and City Council should again express their strong support for the New York Health Act. This is the only way to prevent the rising costs that lead to this erosion of benefits.

After employees of the City of New York retire, they receive health benefits from the City that have been negotiated with City employee unions. Most City retirees join the public Medicare program, with the City paying for supplemental Medigap coverage which covers most out-of-pocket costs.

The City government is now seeking, through negotiations with the City employee unions, to end that combined-benefits program and require all retirees, if they want comprehensive coverage, to join a private Medicare Advantage program. Medicare Advantage plans are private insurance plans funded by the federal Medicare program that cover the same services as traditional public Medicare, plus some additional ones like gym memberships and some dental and hearing services (which are covered by most of these union’s welfare funds), but which also impose additional rules, costs, and restrictions—including limited networks of hospitals and doctors. They charge copays for most services, especially for expensive tests and procedures, and require prior authorization for costly treatments, leading to frequent denials of coverage.

The administrative overhead costs of these private insurance plans average about 14%, which subtracts from the money that Medicare makes available to pay for health care). Further, the City is planning to reduce its spending on retiree health care by as much as $600 million. As a result, spending on health care in the Medicare Advantage plan will be reduced by as much as 24%, or $3,400 per enrollee, below current spending.

Many retirees, learning of this proposal, have declared that they want to stay in the traditional Medicare program, keeping the doctors and other services they now rely on. Since Medicare is a federal program, they can do so, but under the new plan they will have to buy their own supplemental Medigap program if they want the same coverage they now enjoy. Those who choose to stay in Medicare will have to spend from $2,500-$6,000 per year for this supplemental coverage.

Some retirees will be able to afford this; many will not. The City’s workforce, and its retirees, are very much skewed by race and ethnicity. The City’s salary data submitted to the federal government shows that 70% of non-Hispanic white employees make $70,000 per year or more, while only 44% of employees who identify as Hispanic make that much, and just 35% of Black employees are in that upper-income bracket.

These results, shown in the following figure, demonstrate that whites are twice as likely to be in the highest income bracket as Blacks, and 1.6 times as likely as Hispanics. (Of the total full-time workforce, 36% is white, 33% is Black, and 21% is Hispanic.) Racial and ethnic disparities in income among retirees are likely to be even greater, since they worked for the City before many of the current measures aimed at increasing workforce diversity were put in place. 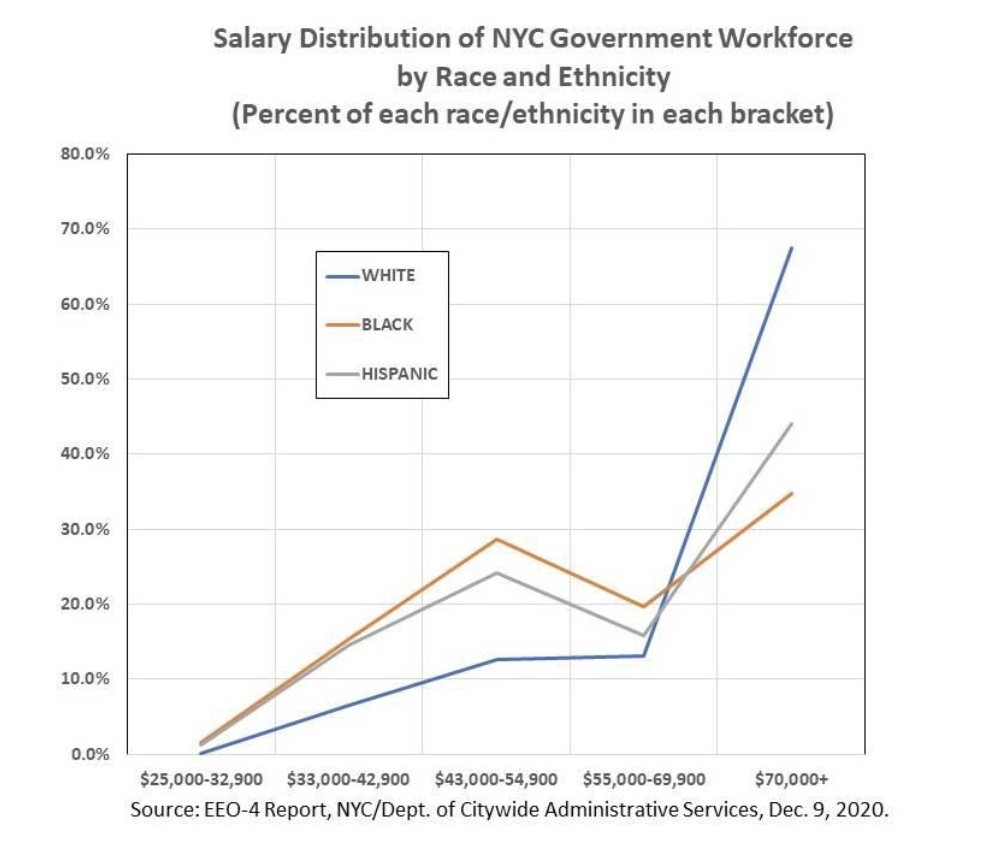 Currently, most City retirees are in the Medicare plan, and all bear the same cost. Under the City’s proposal, there will be a substantial difference between the two plans available to retirees. It will be expensive to stay in Medicare, with its greater choice of physicians, hospitals, and treatments and better access to services. White retirees will be far more likely to afford it. Black and Brown retirees will be more likely to enroll in the Medicare Advantage plan, with its lower (possibly even zero) cost, even though there will be limited choice of services and smaller expenditures per enrollee.

If the City’s plan is adopted, it will lead to a two-class retiree health care system. Currently, the City’s retiree benefits are race- and ethnicity-neutral. Nearly everyone is in the same plan. The new plan will not be equitable. The NY Metro Chapter of Physicians for a National Health Program strongly objects to the City imposing on its retirees a program that will further increase the vast disparities in health and health care access revealed during the past year in the COVID-19 pandemic.

The City should withdraw its plan. It should again express its strong support for the New York Health Act, which will make access to quality healthcare available to all the residents of this State, while controlling the cost increases that are driving this backwards-looking, discriminatory proposal.