On January 15, in his state of the state address, Governor Cuomo announced his intention to create a commission comprised of “health policy and insurance experts to develop options for achieving universal access to high-quality, affordable health care in New York” by December 1, 2019. The Governor’s budget proposal to the Legislature includes a request to authorize such a commission. Noticeably absent from the Governor’s speech and budget proposal is any reference to the New York Health Act, the universal single-payer health care bill that has been passed by the State Assembly for each of the last four years by 2 to 1 margins. A majority of members of the new State Senate have expressed support for this legislation. It has growing popular support statewide, just as support for Medicare for All has been rapidly rising nationally.

The New York Health Act would accomplish the Governor’s goal of providing universal affordable health care access. Yet, instead of highlighting this plan that can realize his goal, he has chosen to form a commission to study “options.” Indeed, the first option on his list to be considered is “strengthening New York's commercial insurance market,” the very structure that is responsible for the exorbitant costs of our broken health care system. 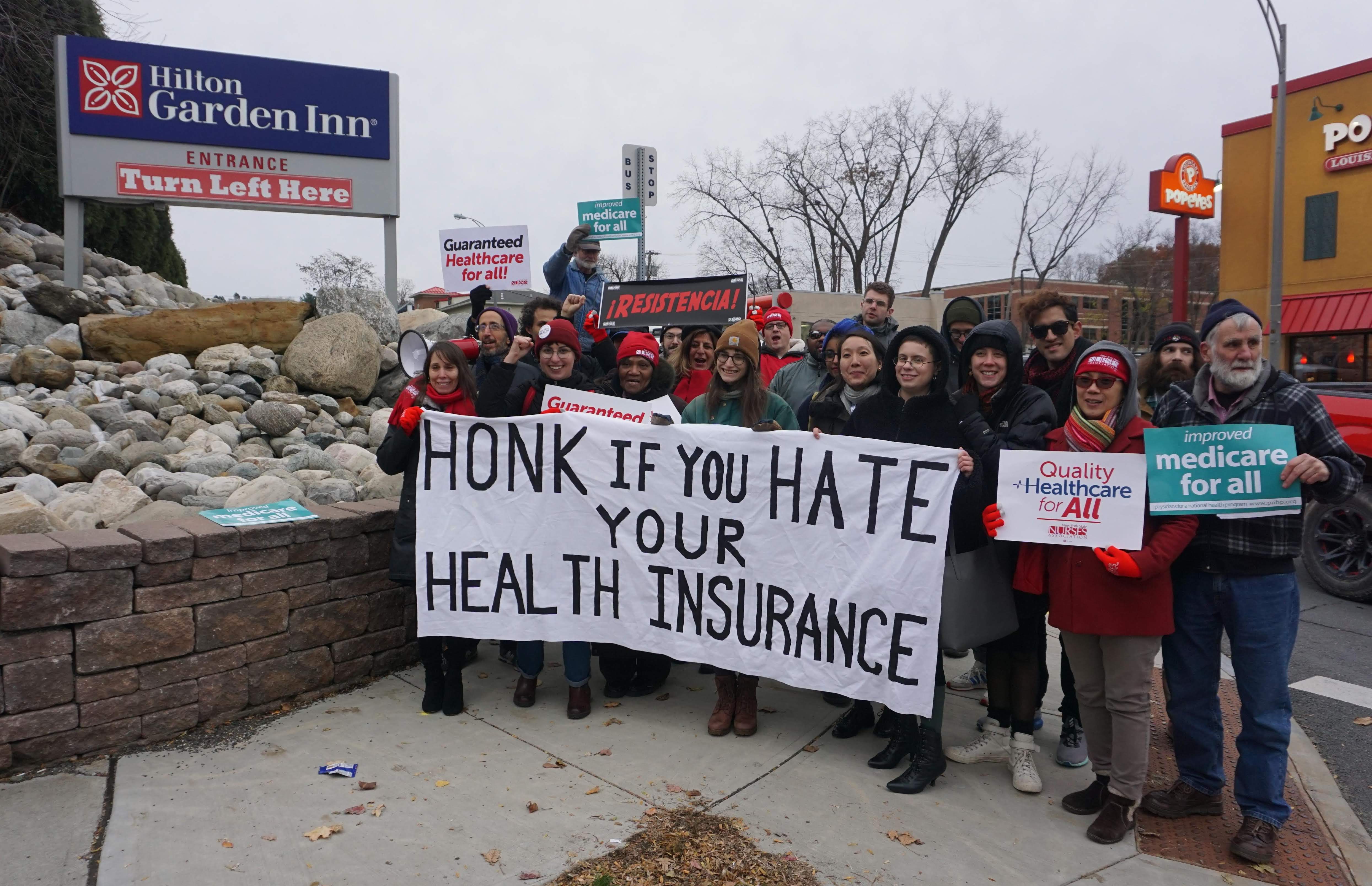 Predictably, the Realities of Single Payer group, the NYS anti-single-payer lobby group funded by the health insurance and pharmaceutical industries, loudly praised the Governor’s proposal. They have engaged in a high-profile media campaign of distortions and scare-mongering to induce public opposition to the New York Health Act. (More here.)

By avoiding consideration of the New York Health Act, the Governor is also ignoring the recent finding of the highly-regarded RAND Corporation (in a study commissioned by the New York State Health Foundation) that affirmed the economic feasibility of the NY Health plan. Using conservative assumptions, the study found that the program would reduce overall health care spending in the state and yield savings in health care spending for up to 90% of New Yorkers, as well as for most businesses in the state. It would do this while providing comprehensive coverage to all New Yorkers with no cost at the point of service. In addition to ending uninsurance in the state, the legislation would end the underinsurance that affects millions of New Yorkers who must often choose between paying excessive deductibles and copays, and paying for other necessities like food and rent. The RAND findings largely paralleled conclusions of numerous studies of single-payer systems conducted nationwide over the past two decades.

Governor Cuomo says that access to affordable health care should be a right. If that is so, why should New Yorkers continue to subsidize the profits and outrageous executive compensation of private insurance companies? Why should doctors and hospitals continue to waste billions dealing with prior authorizations and claims denials from insurance companies driven only by their bottom lines? Why should our state refrain from negotiating lower prices for drugs and medical devices on behalf of all 20 million New Yorkers? The New York Health Act addresses all of these sources of out-of-control costs in the current system, while guaranteeing access to care for all residents.

The governor says he needs a commission to “develop options,” but the best option has already been developed and thoroughly vetted. Another study would simply postpone urgent action to end the crisis facing New Yorkers with unaffordable medical bills, skipped crucial care, and needless suffering. Further, waiting for more studies will block much-needed interim expansion of the safety net, especially for the 400,000+ undocumented immigrants currently ineligible for coverage by any public or private insurance program.

In 2014-15, the Assembly held hearings across the state on the New York Health Act. That body has now passed the bill four times. It’s time for the Assembly to pass it again, and for the Senate to hold hearings and move forward to pass the bill with any needed adjustments.

We urge New Yorkers who want to transform our deeply flawed health care system to contact their legislators and urge them not to approve a study commission, but instead to move forward with the New York Health Act. Start the transition to a universal single-payer system, while immediately expanding coverage options that will alleviate the suffering of the uninsured and underinsured.

It’s time for action, not studies!