Dozens of student descended on the halls of the New York State capitol in Albany on February 2nd, 2016, to set the record straight about healthcare reform: students support a Single Payer Healthcare Program! The New York Health Act (NYHA A5062/S3525), New York’s state bill that proposes a statewide improved Medicare-for-All healthcare, passed the state assembly last summer but has not yet been brought to a vote in the senate. The goal of the Student Lobby Day was to continue the bills forward motion. 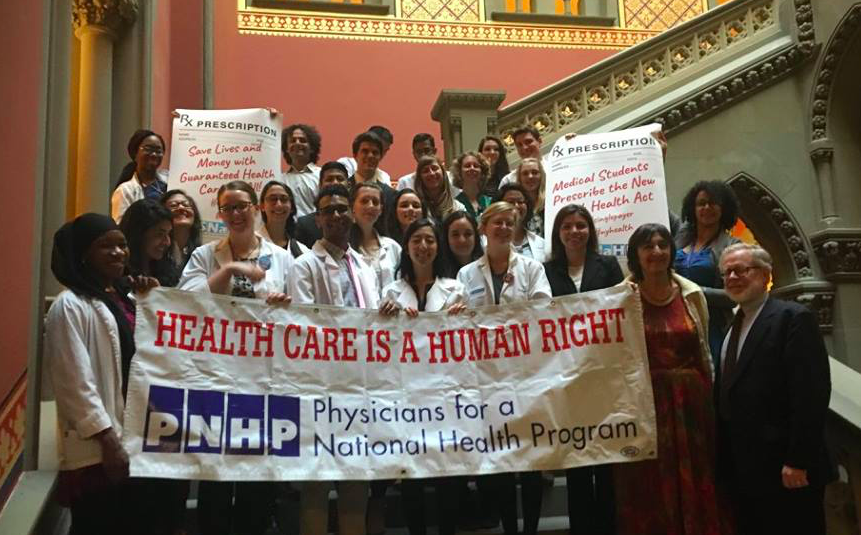 White coats and clipboards in tow, the medical, public health, and undergraduate students began the day with a press conference outside the assembly floor. Joined by assemblyman Richard Gottfried, the NYHA sponsors, several students shared their experiences in classes and clinics that lead them the support single payer. Their testimonies systematically debunked the common myths about a national health program that have been flying around the media: that it is too costly, politically unfeasible, or would mean worse care.

After the press conference it was time to meet with representatives. Groups of students met with over twenty senators and assembly members, ranging from those in outspoken opposition of the bill, to those that simply had never heard. By the end of the day the bill had two more co-sponsors: Assembly Members Alicia Hyndman and Pamela Hunter!

For many students, this was the first experience advocating at the legislative level. One student exclaimed, “ I didn’t even know people could do this!” Thanks to the help of PNHP-NY Metro, these students had the opportunity to speak out for the people they serve, while gaining valuable lifelong advocacy skills. In New York and around the nation students are speaking out to support a Single Payer National Healthcare Program. The message is clear, and the time to make a change is now!