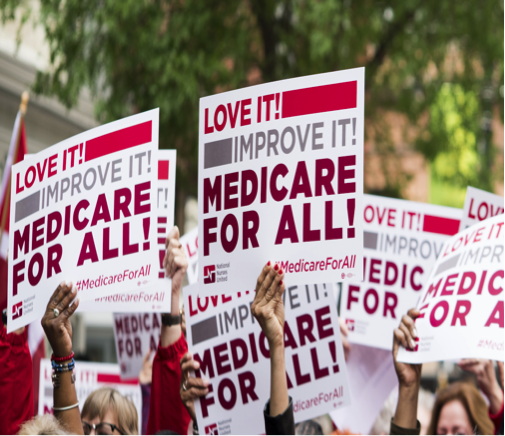 Below is the statement that PNHP - NY Metro is issuing today denouncing this roll-back of access to affordable healthcare, hard won by the union movement. A campaign is developing to demand that the Mayor block this destructive move. If you'd like to help, or have questions, please email [email protected].

The New York Metro Chapter of Physicians for a National Health Program (PNHP), as concerned healthcare providers and advocates, supports the many retired city employees who oppose New York City’s attempt to reduce the cost of its health benefits by moving its 245,000 retirees and their dependents from traditional public Medicare to a private Medicare Advantage plan. If carried out, this plan will limit retirees’ choice of physicians and hospitals, impose additional costs on them when they seek care, and vastly increase the hassles involved in finding and accessing care. And ultimately, it will not hold down the City’s costs. The Mayor’s Office of Labor Relations is moving to achieve an agreement with the Municipal Labor Committee (the coalition of city workers’ unions) to implement this new cutback in benefits starting this fall.

Only progress toward a universal, publicly-funded plan such as the New York Health Act here in our state, and a Medicare for All program nationally, can contain costs and assure that every resident can get the care they need. The City’s move from traditional public Medicare to restrictive, privatized Medicare Advantage is a step backwards.

Since its inception in 1965, Medicare has proven to be the most just and cost-efficient system we have to reimburse medical expenses.  By providing health insurance to everyone over age 65 and those with certain chronic illnesses or disabilities, Medicare covers everyone regardless of race, ethnicity, income, gender, gender identity, or sexual orientation.  As a federally-run program, it is a non-profit system that avoids the high administrative costs associated with private insurance companies (14-18% for insurance companies versus 2% for Medicare).  With the vast majority of physicians and hospitals accepting Medicare, patients have a wide range of choice.

Following limited efforts in the 1980s and 90s to open up Medicare to private insurers, in 2003 Congress created a new system of subsidized private insurance for Medicare beneficiaries which they labeled Medicare Advantage.  This is essentially a privatization of Medicare.  Because it replaces a public, low-overhead, nonprofit health insurance system with a private, high-overhead, for-profit system, it actually becomes a Medicare DIS-Advantage plan.  Since private insurance companies are profit-driven and have greater overhead costs, they need to take a variety of measures to reduce their spending on actual medical care (what they refer to as their “medical loss ratio”).

Medicare Advantage plans pay physicians and hospitals less than traditional Medicare and make it more difficult, through prior authorization requirements and delayed payments, for them to provide care and receive their reimbursements. As a consequence, many Medicare providers refuse to join Medicare Advantage.  This leads to limited networks of providers in a service area, restricting patients’ choice of physician and hospital.  Medicare Advantage plans save money by requiring patient copays, thereby shifting costs onto patients and thus discouraging medical care visits.  These plans also require prior authorization by the insurer before many needed services can be delivered – delaying care, often in times of great medical need. They avoid paying for expensive services by denying recommended care, limiting networks to less costly providers, and forcing patients to go out of their network to get the care they need. The results can be costly and even deadly to patients.

Ultimately, Medicare Advantage is morally unacceptable. It replaces an equitable public system and its mission to serve the public and meet patients’ needs with a private system that sees medical costs as a loss that it tries, in a variety of harmful ways, to limit and reduce.  Profit has no place in health care. Instead, what has happened is that “Medicare Advantage is the most lucrative niche in the insurance market, as long as Congress wants to keep it as such” (Robinson, JAMA Int. Med., Sept 2017).

Insurers recruit patients into Medicare Advantage plans through massive, misleading advertising campaigns, telling them that these plans give more benefits than traditional Medicare such as gym memberships and vision and dental coverage.  The companies especially seek those who are healthy and will cost them less. Many patients who sign up don’t understand that they will not have traditional Medicare. When they get sick and discover the cost and hassles of getting care, they flee back to traditional Medicare. If this plan is adopted, City retirees won’t have that option unless they pay their healthcare costs individually or through costly Medigap private insurance plans.

Instead of looking to the private sector to save money, New York City should be supporting actions that get at the root of the healthcare cost problem:  a market-driven financing system and a lack of regulation at the state and federal levels to set “reasonable prices” for healthcare services.

The City should recognize that a publicly-funded healthcare financing system, “Medicare for All” nationally and the New York Health Act in our state, is the only way to truly contain healthcare costs.  Billions now spent on wasteful administrative costs, advertising, and profits would be available to pay for healthcare for everyone. The NY Health Act would save NYC far more than the $600 million that the City claims the Medicare Advantage takeover would save annually, while improving everyone's health benefits rather than undermining them. Nationally, support for a single-payer system has never been stronger.  Here in New York, we have an unprecedented opportunity to pass the New York Health Act, which would guarantee access to healthcare for every New Yorker regardless of employment or immigration status. The bill has the support of a majority of the members of the State Legislature (and a supermajority in the Assembly). The Mayor and the New York City Council have expressed their support for the New York Health Act. The City must not encourage the privatization of public Medicare and must instead move forward and support a universal healthcare program that will successfully contain costs. Going backward to private insurance is not an acceptable way of providing healthcare for our people -- whether retired, employed, or unemployed.