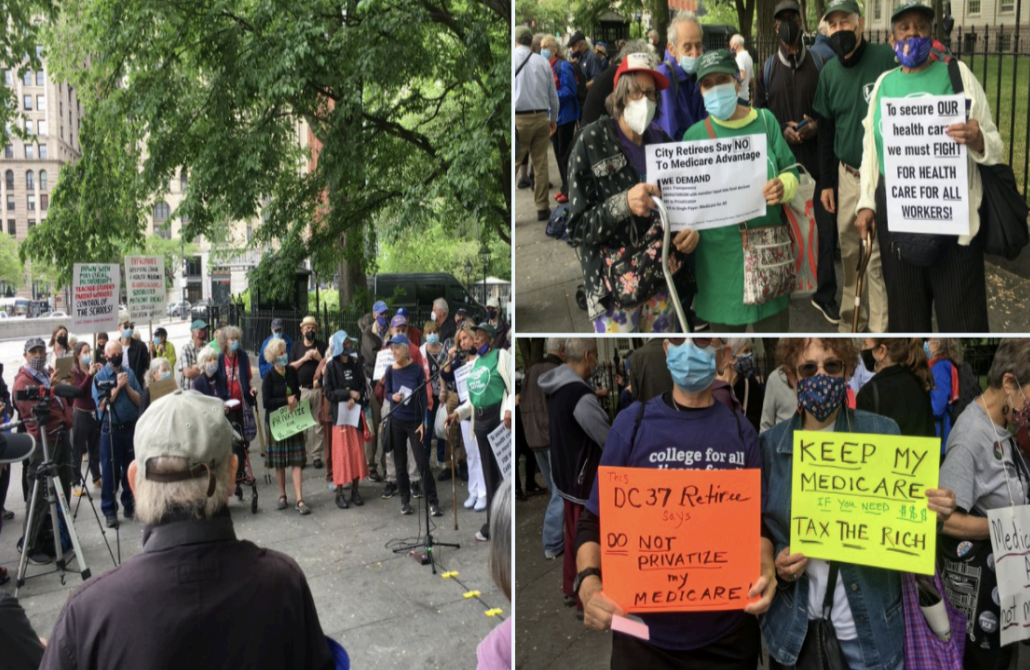 The NY Metro Chapter of Physicians for a National Health Program (PNHP) is supporting the many retired city employees who oppose New York City’s attempt to limit its spending on health benefits by shifting its 245,000 retirees and their dependents from traditional public Medicare to a private Medicare Advantage plan run by a health insurance company.

Medicare Advantage plans have much greater overhead expenses than public Medicare. To maintain their profits, they take a variety of actions that limit members’ access to medical care. If carried out, the City’s plan will limit retirees’ choice of physicians and hospitals, impose additional costs on them when they seek care, and vastly increase the hassles involved in finding and accessing care. Currently the City’s plan limits retirees’ out-of-pocket costs to no more than $1,053 per year; under the City’s proposal, annual costs could go as high as $7,550 per person.

The City’s plan is merely a temporary palliative. Only a universal, publicly-funded plan like the New York Health Act here in our State, and a Medicare for All program nationally, can truly contain costs and assure that every resident can get the care they need. The City’s move from public Medicare to restrictive privatized Medicare Advantage is a giant step backwards for access to health care.

Here is how some New York City physicians see it:

“My patients came to my office after being told that I accepted Medicare. When showing their Medicare Advantage Plan card, they learned that I did not accept it. I avoided these plans as they paid poorly and it was difficult to extract that lower payment from them, requiring a lot more paperwork on my side.” -Elizabeth Rosenthal, MD.