Overview: New York City is about to switch the health insurance plan of all retired government workers from traditional public Medicare to a private Medicare Advantage plan. Under the City’s proposal, spending on health care will be reduced by 24%. The impact on retiree health could be harmful or deadly.

Employees of the City of New York, including such associated agencies as the City University of New York, receive their health benefits through employer-provided private insurance negotiated with the City employee unions. Like most Americans covered by private employer-based insurance, they look forward to the time when, upon retirement, they can move to the far less restrictive federal Medicare program.

Thus, upon their retirement, most City retirees join the Medicare program and look forward to its simplicity and reliability. This federal program provides basic medical coverage with few limitations, but it covers only 80% of the cost of outpatient care and requires copayments for inpatient (hospital) services. The City government, through contracts negotiated with its various employee unions, provides comprehensive coverage, called GHI Senior Care, which covers most out-of-pocket costs.

The City government is now seeking, through negotiations with the City employee unions, to end that program and require all retirees, if they want comprehensive coverage, to join a private Medicare Advantage program. (The term “Medicare Advantage” was created by the Congress in the Medicare Modernization Act of 2003. Previous version of this program had been called Medicare Managed Care and Medicare+Choice.) Medicare Advantage plans are private insurance plans funded by the federal Medicare program. They cover the same services as traditional public Medicare, plus some additional ones like gym memberships and some dental and hearing services, but they may impose additional rules, costs, and restrictions.

The City now spends $600 Million per year on retiree health benefits. An agreement for health care savings signed in 2018 with the Municipal Labor Committee (MLC), representing the City employee unions, provided that in its third year (then 2020 but delayed to 2021 because of the pandemic) it would save the City $600 Million. The City is proposing to achieve these savings by moving its retirees to a Medicare Advantage plan like those that have been widely advertised to seniors since their creation in 2003.

We do not yet know the details of the plan the City will adopt. Even when information on the plan is finally released, important features of the plan (such as when prior approvals will be required) will remain hidden behind the corporate wall of “proprietary information”. So, in the analysis that follows, we will use average features of Medicare Advantage plans to estimate the financial effects this change will have on retiree health care.

Currently, the Kaiser Family Foundation estimates that Medicare spends an average of $11,953 annually per enrollee in New York State. For the 245,000 Medicare enrollees that the City now has in its program, this amounts to a total of $2.9 Billion per year coming from the federal Medicare program. The City adds another $600 Million, so the current cost of providing health care to the City’s retirees is $3.5 Billion. (Note that, as expected, the City’s payment is about 20% of the total, reflecting the 20% average coinsurance required by the Medicare program.)

However, not all of these funds will be available to pay for the delivery of healthcare. Private insurers providing Medicare Advantage plans spend considerable sums on internal administrative expenses or overhead. There is a widespread belief that the private sector is inherently more efficient than the public, government sector. However, the health care field is an exception to this general idea. Private insurance companies have much greater administrative expenses than do public agencies. They not only have to process claims, but they conduct complex prior approval processes in order to limit their spending on expensive treatments and procedures. They negotiate rates with physicians, hospitals, and other providers. They purchase extensive advertising and other marketing tools. They pay high salaries, often in the millions of dollars, to their administrators. And, of course, most of them are for-profit companies which typically make at least 5% profit on their overall revenues, or 20% or more on their actual expenses.

The Kaiser Family Foundation has estimated that Medicare Advantage plans have an average overhead expense of 14% of their total revenue. If the City’s plan is adopted, that will be a total of about $427 Million per year. So the funds available to pay for the delivery of health care will be $427 Million less than the $3.05 Billion the insurers receive from the federal government, or $2.62 Billion. Before comparing this to current spending, we must note that the $600 Million that the City currently spends on supplemental coverage for its retirees is also spent through insurance companies. This means that a significant portion of its funds are actually spent on internal administrative overhead. We will use the same overhead figure, 14%, for this spending as for the Medicare Advantage plan (the same companies are generally involved.) So just 86%, or $516 Million, is actually available today to pay for the delivery of health care. Total spending on actual health care today is then $3.45 Billion per year, not the $3.5 Billion shown earlier.

Finally, the reduction in health care spending under the City’s plan will be 3.45 – 2.62 = 0.83, or $830 Million per year. This is 24% of what is currently spent on delivering health care to retirees. The following graph shows this result in visual form. The calculations are summarized in a table on the next page. 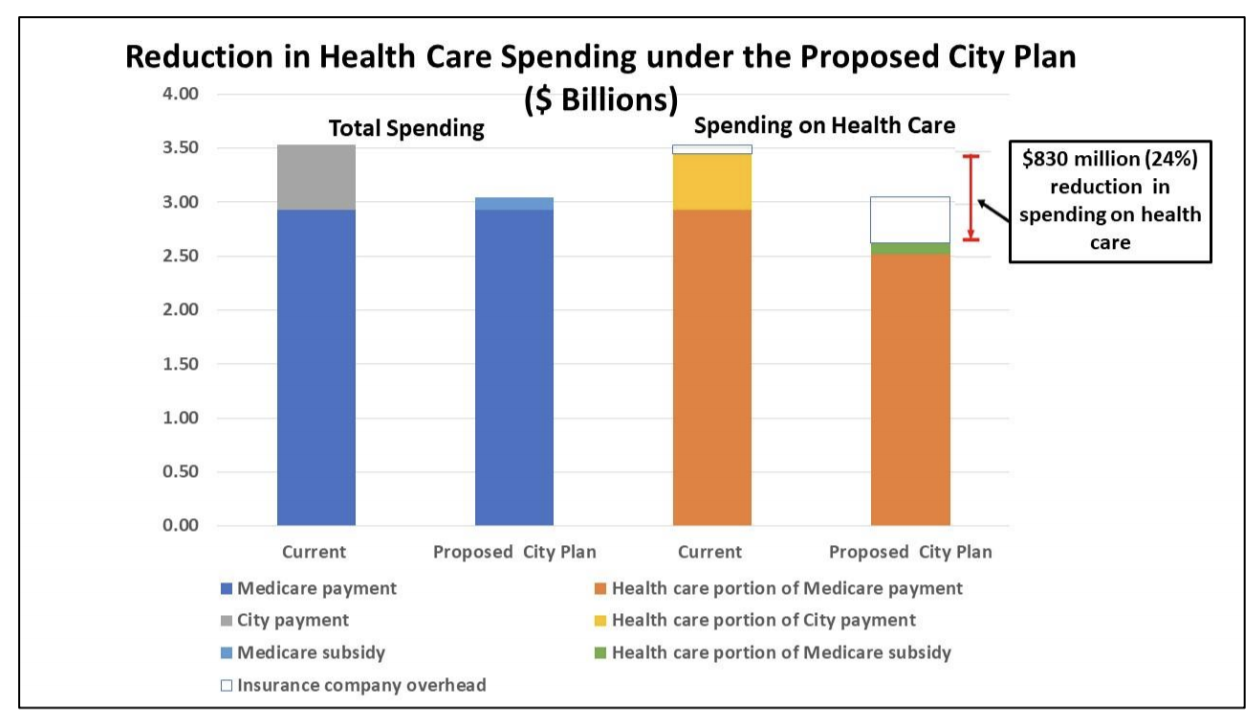 The insurance companies will claim that this reduction in spending is possible because they take such good care of their members that they remain healthier than they would be otherwise. There is no evidence, anywhere, of either such savings or of any activities that would lead to such savings. Instead, these “savings” – actually, these reductions in spending on health care – are created by (1) the extensive use of deductibles and copays, which shift costs from the insurer to the patients; (2) the reduction in the use of health care services when patients, faced with financial barriers, avoid seeking care; (3) the requirements for prior authorization by the insurance company of expensive treatments and procedures, leading to denials and delays; and (4) paying doctors and hospitals less than traditional Medicare does. Together, they create spending reductions approaching a quarter of all health care spending. How many patients will have their health worsened, or will die, as a result of this severe cut in spending on their health care? If the City’s plan is approved, only time will tell. 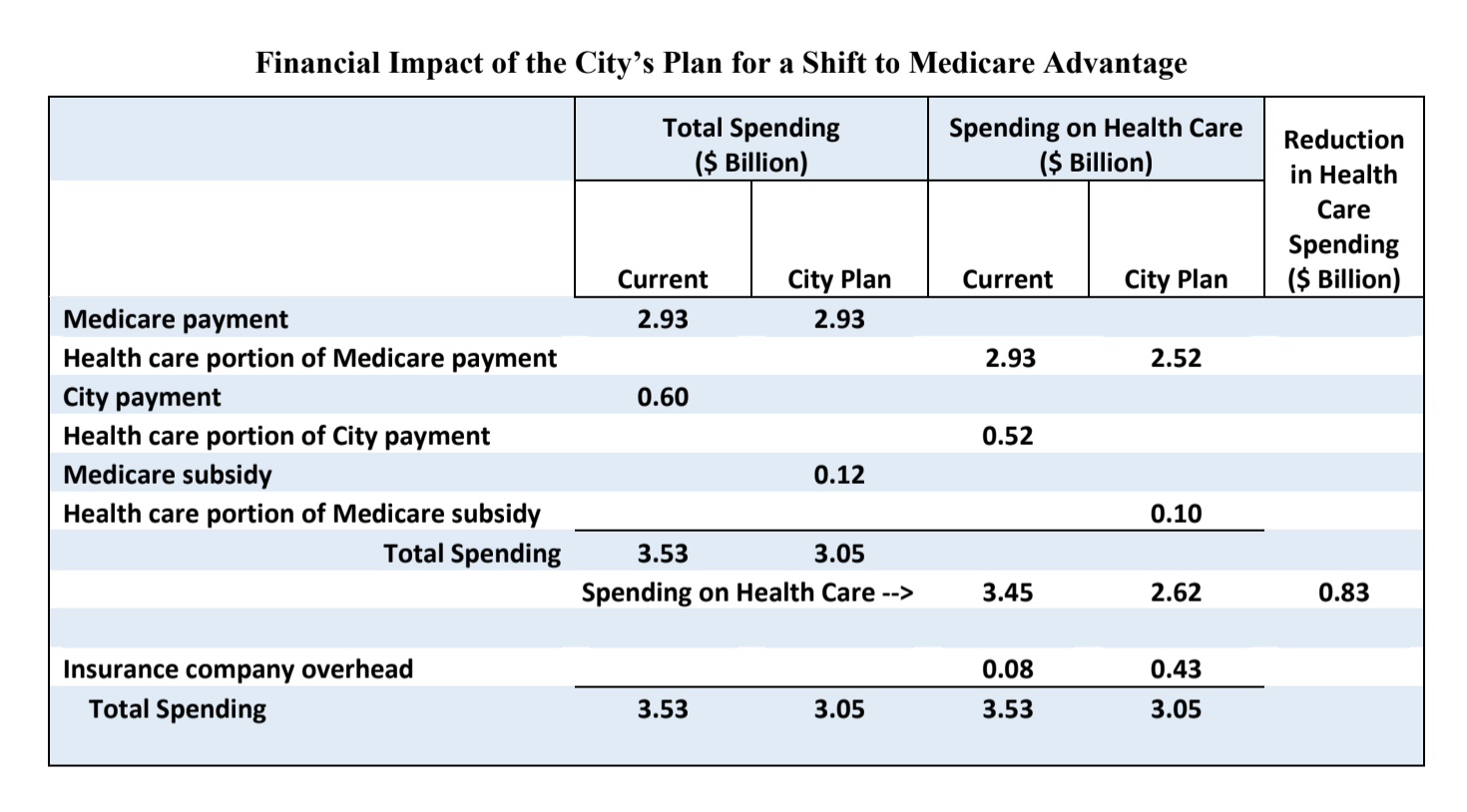