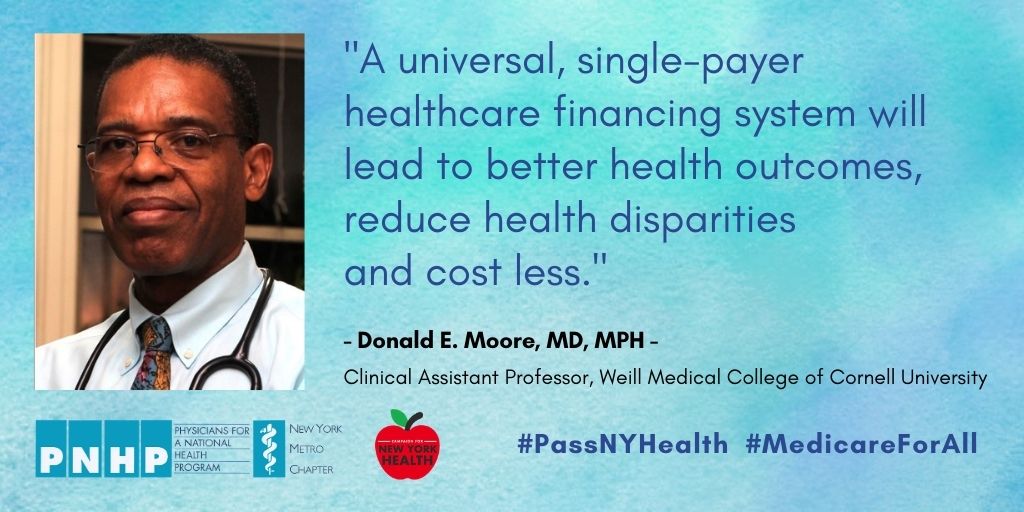 Dr. Donald Moore is a practicing primary care physician in Brooklyn.  He was born in Jamaica and emigrated to New York City when he was 14.  He earned his MD and Masters in Public Health at Yale and did a residency in Emergency Medicine. He viewed medicine as a “calling” and his practice as a “service to the community.”  He joined the Kings County Medical Society, the county branch of the American Medical Association, and was elected president.  In 2010, he bravely invited me to speak on single payer reform to the society’s Board. He soon joined the Board of the New York Metro chapter of Physicians for a National Health Program.  Recently, he has become President of the Provident Clinical Society, the Brooklyn affiliate of the National Medical Association.  Just this year, that Society and our PNHP chapter co-sponsored a Forum on Racism in Medicine at Downstate. Wherever he goes professionally, he continually educates about the importance of passing single-payer healthcare.

Having treated many patients with COVID-19, Dr. Moore organized a team of public health experts to assess the government’s response to the pandemic.  Their report was featured on an October TV broadcast sponsored by Congressmember Yvette Clark.

Dr. Donald Moore is a physician who acts on the principle that healthcare is a human right and that single payer is a crucial step in guaranteeing access to health care for all.

Writings on single-payer and COVID-19 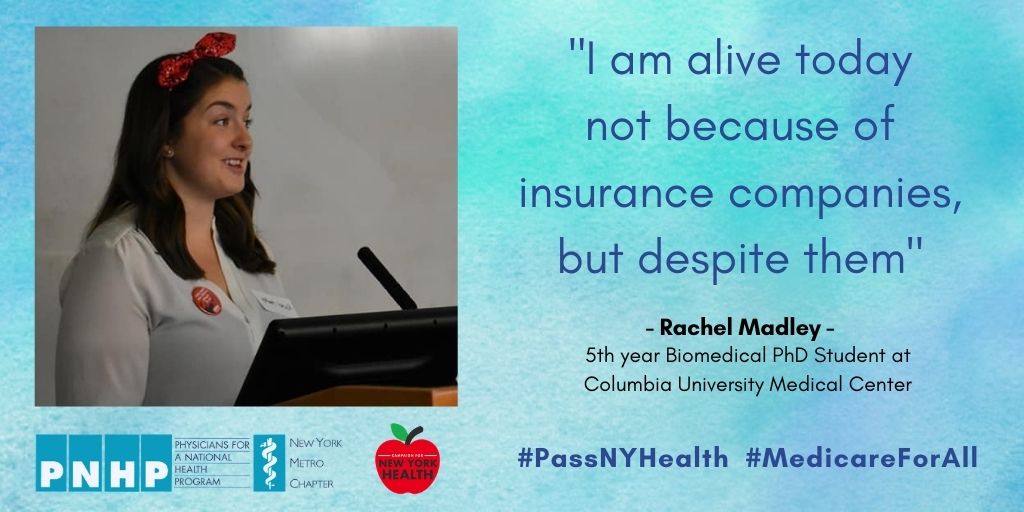 Rachel Madley is a rising star in the Single Payer Movement.  As a PhD candidate in biomedical science at Columbia University, she believes that healthcare should be a humanitarian effort, and sees single payer as the best way to reform our broken system.

Rachel has been an executive board member of Students for a National Health Program (or SNaHP),  and a board member of Physicians for a National Health Program (PNHP-NY Metro), and has promoted the single payer movement by developing new SNaHP chapters across the country. Last year as she was a PNHP - New York Metro student fellow, she  and worked with 9 student chapters to organize for single payer, and helped coordinate the first-ever Virtual Lobby Day for the New York Health Act. I have had the honor to work alongside Rachel in SNaHP, and am amazed at her commitment to doing the small and big things to push our movement forward. Once COVID hit, she developed a powerful presentation demonstrating a superior response to the pandemic by single payer systems, and presented it nationwide.  Last fall, she  wrote a hard-hitting opinion piece in the NY Times entitled “Does anyone really love their private health insurance”?  where she describes her experience with our fragmented system when hospitalized with diabetes.

PNHP – NY Metro is proud to honor Rachel for her accomplishments & the promising future she will clearly bring to the single-payer movement.

Writings by Rachel and others she recommends on single-payer 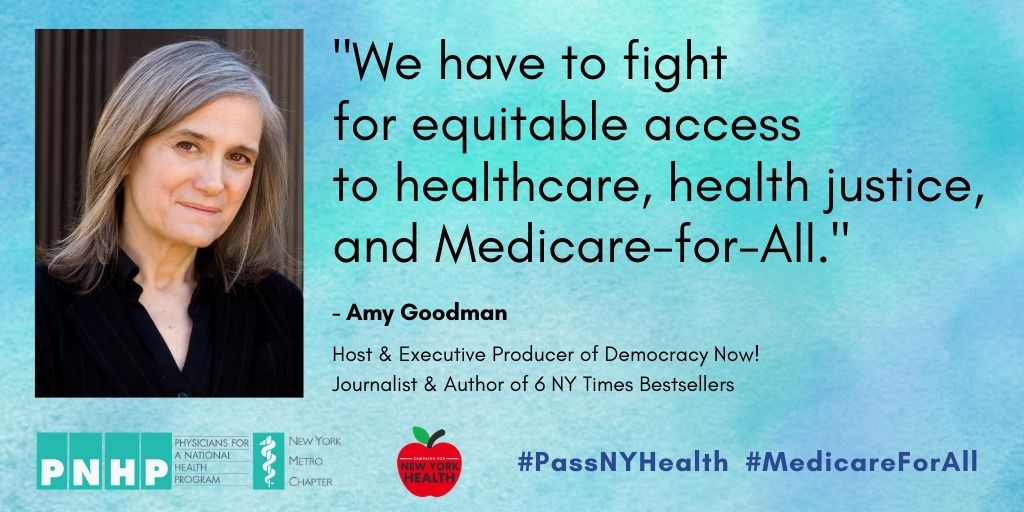 Amy Goodman is the host and executive producer of Democracy Now!, a national, daily, independent news program airing on over 1,400 public TV and radio stations worldwide. Democracy Now! was launched in 1996 by the listener-sponsored, peace-and-justice Pacifica Radio Network that accepts no corporate funding, and Amy has maintained that principle since going out on her own.  She has co-authored six New York Times bestsellers and has received numerous awards for her journalism.

Democracy Now, which Amy cohosts with accomplished Latinx journalist Juan Gonzalez, has often spotlighted the abuses and gaps in the private health insurance system and the structural racism of healthcare delivery. Amy has long offered a platform for grassroots advocates of universal, single-payer healthcare, including leaders of our national organization, Physicians for a National Health Program. As Amy has written about Medicare for All, "When the people lead, the saying goes, the leaders will follow. It’s a matter of life and death."

Amy began her journalistic career at Pacifica’s New York City radio station WBAI (99.5 FM), where she started as News Director. In 1992 she became morning show cohost with Black community advocate Bernard White, Amy was always open to program ideas about AIDS activism and other social justice topics. Like her cohost Bernard, Amy always prioritized community voices -- especially LGBTQ, Black and Latinx voices -- who were challenging and resisting the institutions that disregarded the survival needs of excluded and suppressed communities. Today, as she diligently covers another pandemic with massive, avoidable suffering, Amy again centers the voices of the communities forced to endure the worst toll of systemic racism. And she continues to host academics and activists who insist that only healthcare for all will truly protect public health.

Tweet from the gala with a quote from Amy

Interviews and writings by Amy on single-payer