Each of the four activists that we are highlighting this year share a fundamental understanding that single-payer and health justice are inextricably interlinked with every aspect of our lives.

Though they come to this work with different experiences and through different areas of focus, they each hold an informed analysis of the intersections of health justice and the societal struggles we face including racial justice, housing, employment, immigration, disability, aging, HIV, drug use, harm reduction, police violence, incarceration, birth justice, food security, environmental justice, and economic equity.

In their organizing, each champions single-payer as one of the foundational, indispensable steps towards creating a just healthcare system & society that puts people over profits and serves everyone’s needs.

With community champions like these working together with us, the struggle for guaranteed, universal, single-payer health care for all of us is is stronger than ever. 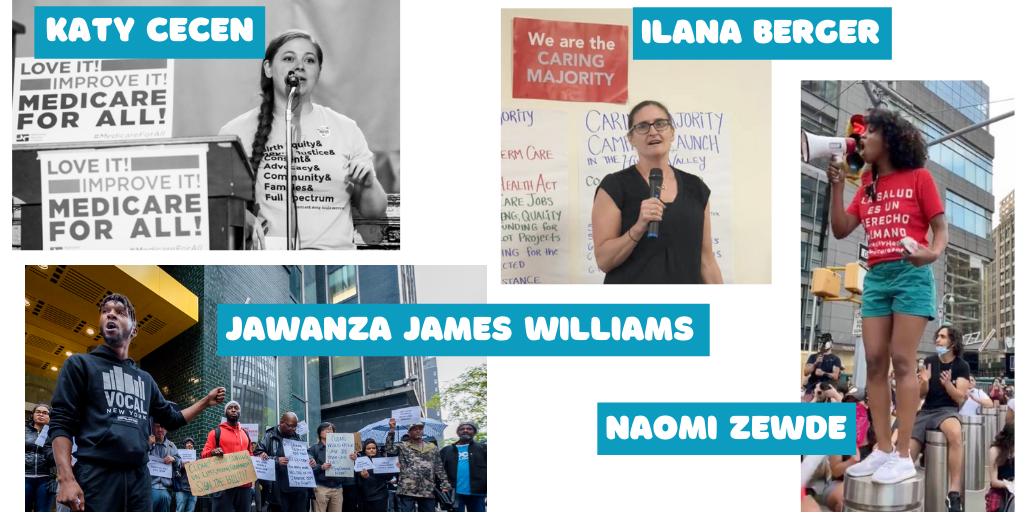 Katy is a doula, trained midwife & nurse who worked in the NICU of a State run, segregated Black & intentionally underfunded hospital in Brooklyn, NY from 2014-2019. She started the campaign #Equity4Downstate which was instrumental in securing an additional $50 million in funding for the hospital in the 2020-2021 NY State Budget. She is now a full-time activist, organizing birth workers and birthing & birthed  people to work on legislation addressing medical racism and misogyny and hopes to help build a movement for birth liberation.

Ilana is the New York Director of Hand In Hand (a national network of employers of nannies, housecleaners and home attendants working for dignified and respectful working conditions; & a sister organization to the National Domestic Workers Alliance) and Co-Director of The New York Caring Majority (a movement of seniors, people with disabilities, family caregivers, and domestic and home care workers from all across the state). She has been organizing since 1996 in community-based organizations in New York, Miami, San Francisco, including ten years as co-founder and Executive Director of Families United for Racial and Economic Equality (FUREE) in Brooklyn.  After leaving FUREE, Ilana was Co-Director of the New Bottom Line, a national campaign bank accountability campaign uniting four national organizing networks. Ilana has consulted for local and national organizations including the Ford Foundation, National People's Action, Teachers Unite, the North Star Fund, the Center for Community Change, the Center for Popular Democracy, Citizen Action of NY and Health GAP. Ilana has two daughters and lives in Kingston, NY.

"This April, my amazing grandmother died at the age of 108. For the last 4 years, after she suffered a stroke at 104, home health aides made it possible for her to live in her own apartment and maintain a high quality of life. ALL people deserve the skilled and loving care she received, and when we win the NY Health Act, with long-term care included, all New Yorkers WILL receive that care." 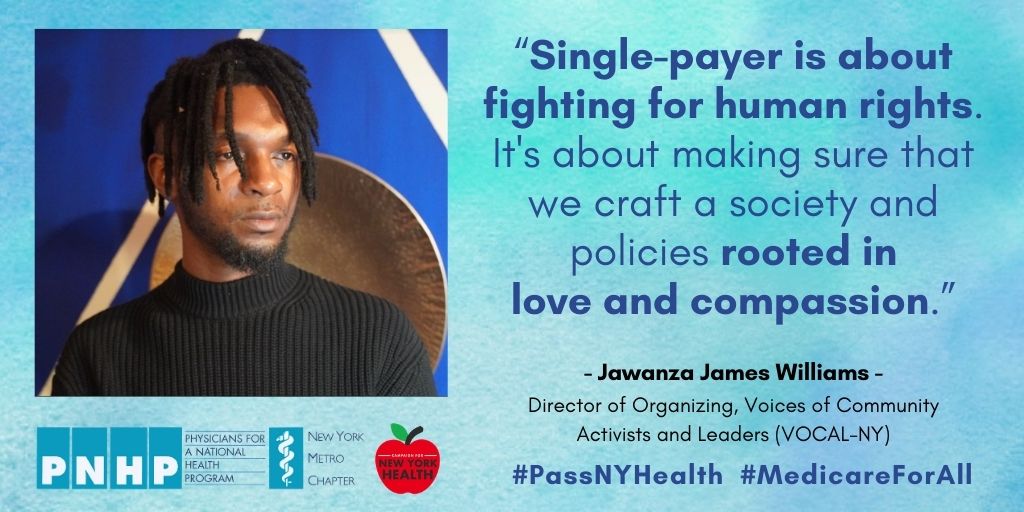 Jawanza is a Black, radical Queer, Prison Abolitionist, Socialist, Community Organizer. He is a native of Beaumont, Texas. After he received a BA in English from Schreiner University in 2012, he moved to New York City, where he now works with the political organization Voices of Community Activists and Leaders (VOCAL-NY) as the Director of Organizing. Williams is also a member of the Democratic Socialists of America and a founding member of its Afrosocialists and Socialists of Color Caucus.

Naomi is chair of the Healthcare Committee of Grassroots Action NY, as well as assistant professor in health policy and management at the CUNY School of Public Health in the city of New York. She studies how public policies can reduce inequality in health insurance and in wealth. Naomi is also a fellow at the Roosevelt Institute, and formerly a post-doctoral research scientist at the Columbia University School of Social Work, in the Center on Poverty and Social Policy.

"Single payer healthcare means no deductibles, no co-pays, and no narrow networks. It means the care we need, instead of the paperwork we don’t."