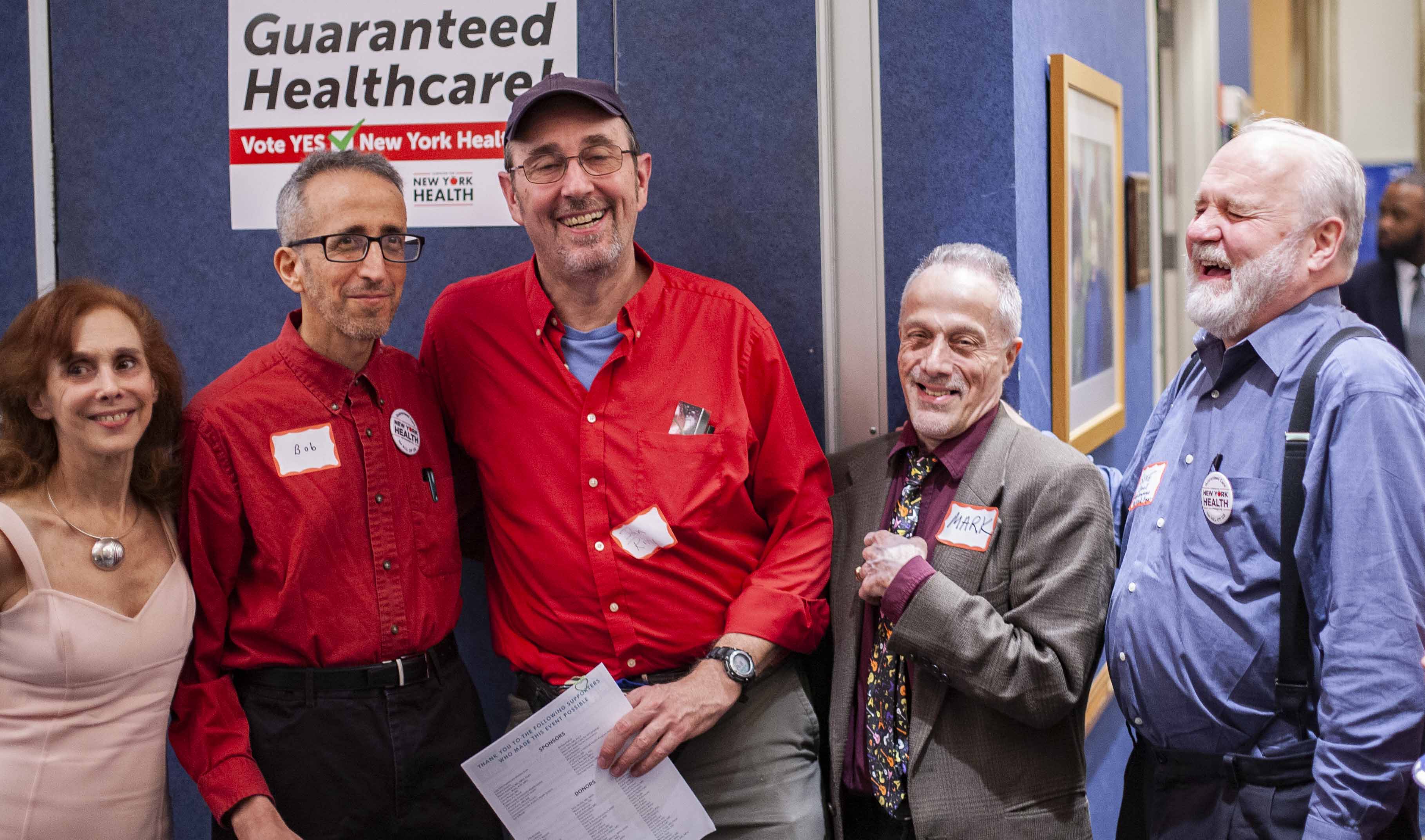 We had a wonderful gala on June 13, honoring champions dedicated to health justice. This year’s honorees included Martha Livingston,Ph.D., Senator Gustavo Rivera, and the Residency Program in Social Medicine at Montefiore. Just two weeks earlier, for the first time ever, the New York State Senate Health Committee held an official public hearing on the “New York Health Act” (NYHA), a bill to create a fully-public universal healthcare program covering all New York residents. It was ideal to celebrate this milestone with our guests and honorees - so many of whom helped contribute to this latest victory for our healthcare for all movement. 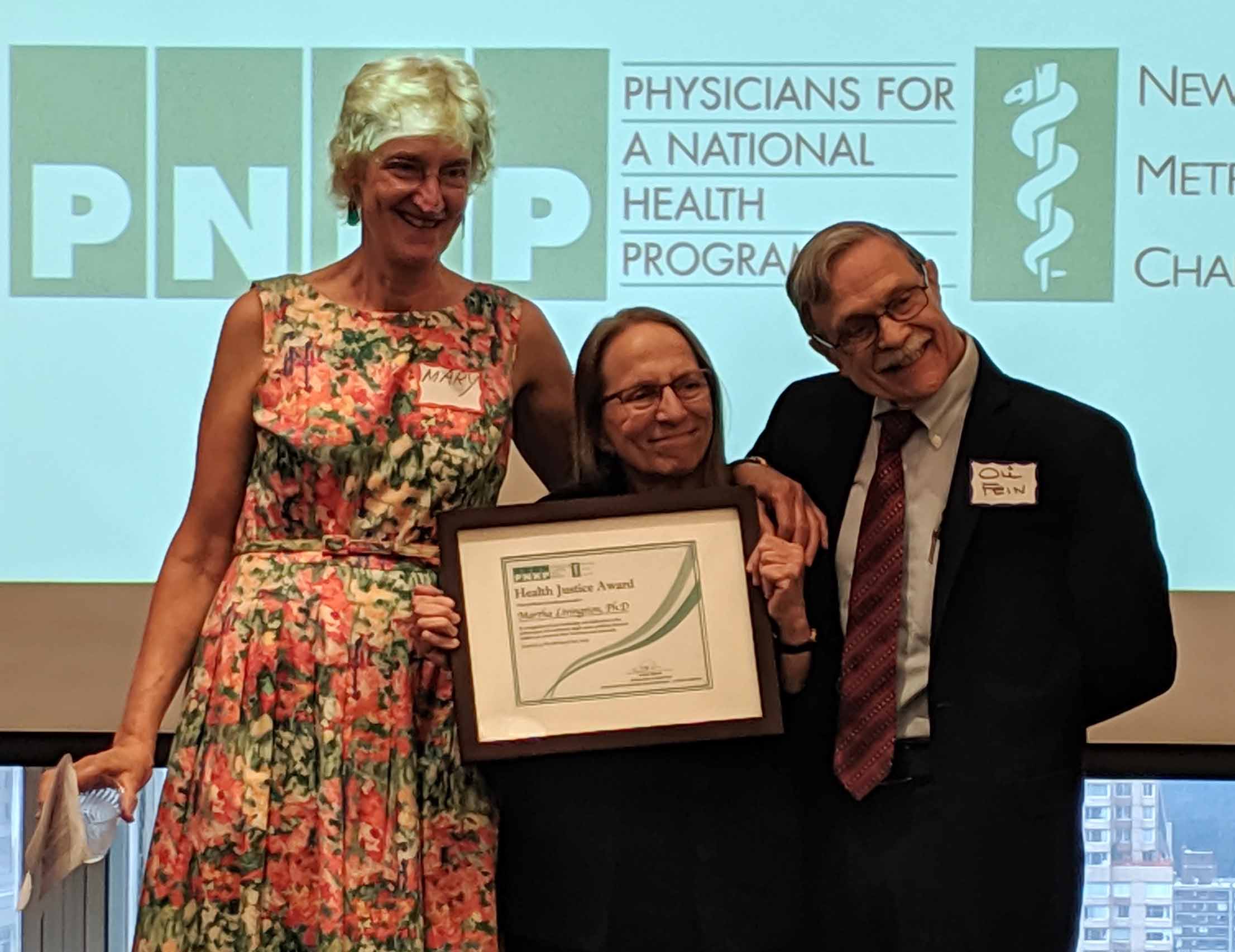 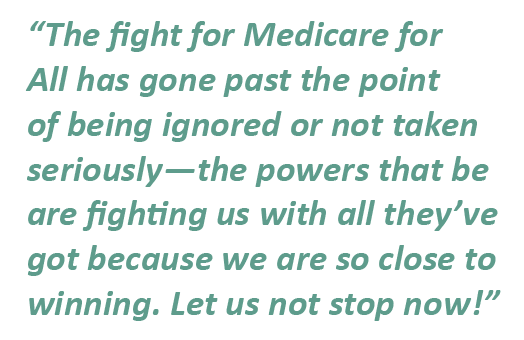 The night’s first honoree was PNHP - NY Metro Vice Chair Dr. Martha Livingston, Professor and Chair of the Department of Public Health at SUNY Old Westbury. Dr. Livingston has served our cause tirelessly through the years giving talks, penning letters and organizing physicians.

She began her speech by talking about what an honor it has been to volunteer for PNHP - NY Metro since 1982, “the most inclusive PNHP chapter in the US,” and to collaborate with other activists who share a common vision for a publically-funded, single-payer, universal healthcare program that puts people over profits. She said “Our fight is simple. We are fighting for everyone in this country to have equal access to quality healthcare.” She also extoled the importance of working collaboratively with other grassroots allies, such as disability activists, who have helped further our cause by pushing for the inclusion of Long-Term Care (LTC) into single-payer legislative proposals throughout the country.

Summarizing the current state of our fight, Dr. Livingston concluded her remarks with the old adage “First they ignore you, then they laugh at you, then they fight you, and then you win.” She added “The fight for Medicare for All has gone past the point of being ignored or not taken seriously—the powers that be are fighting us with all they’ve got because we are so close to winning. Let us not stop now!” 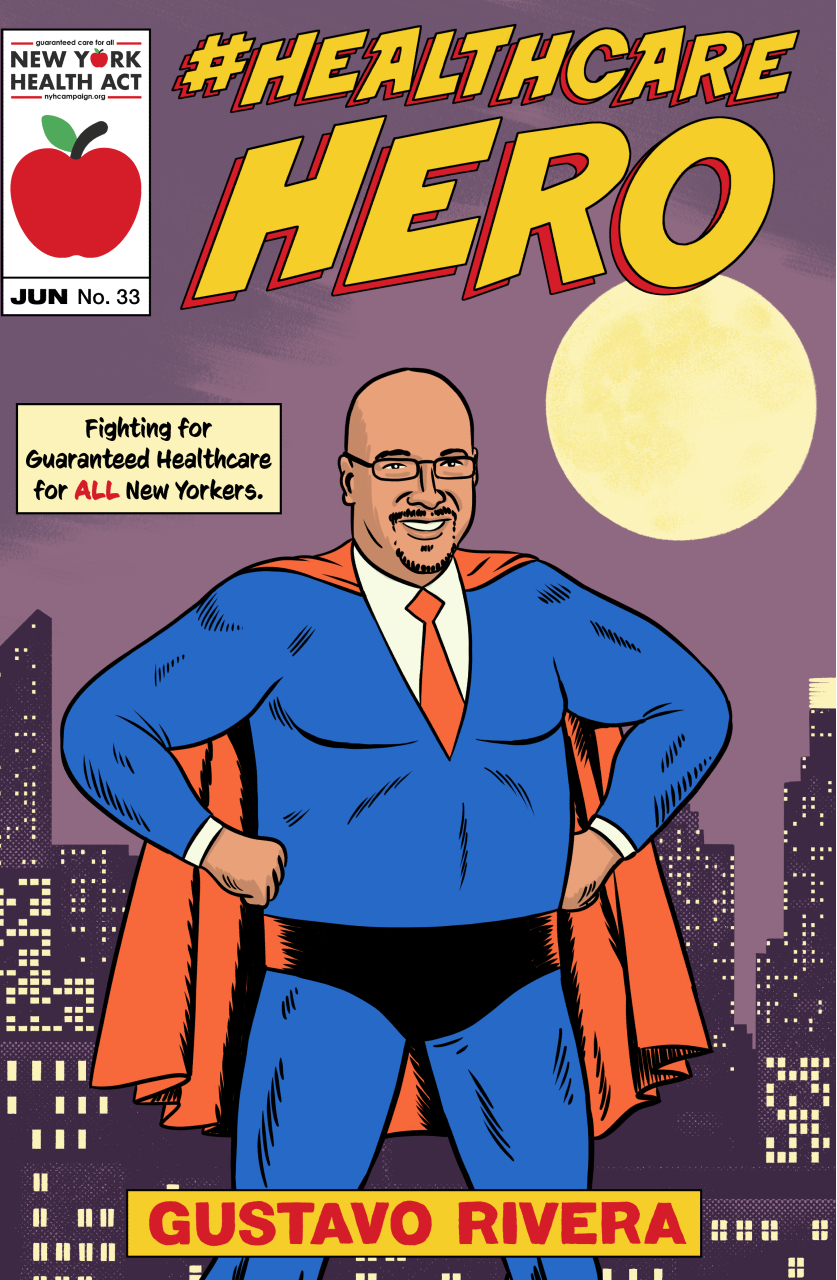 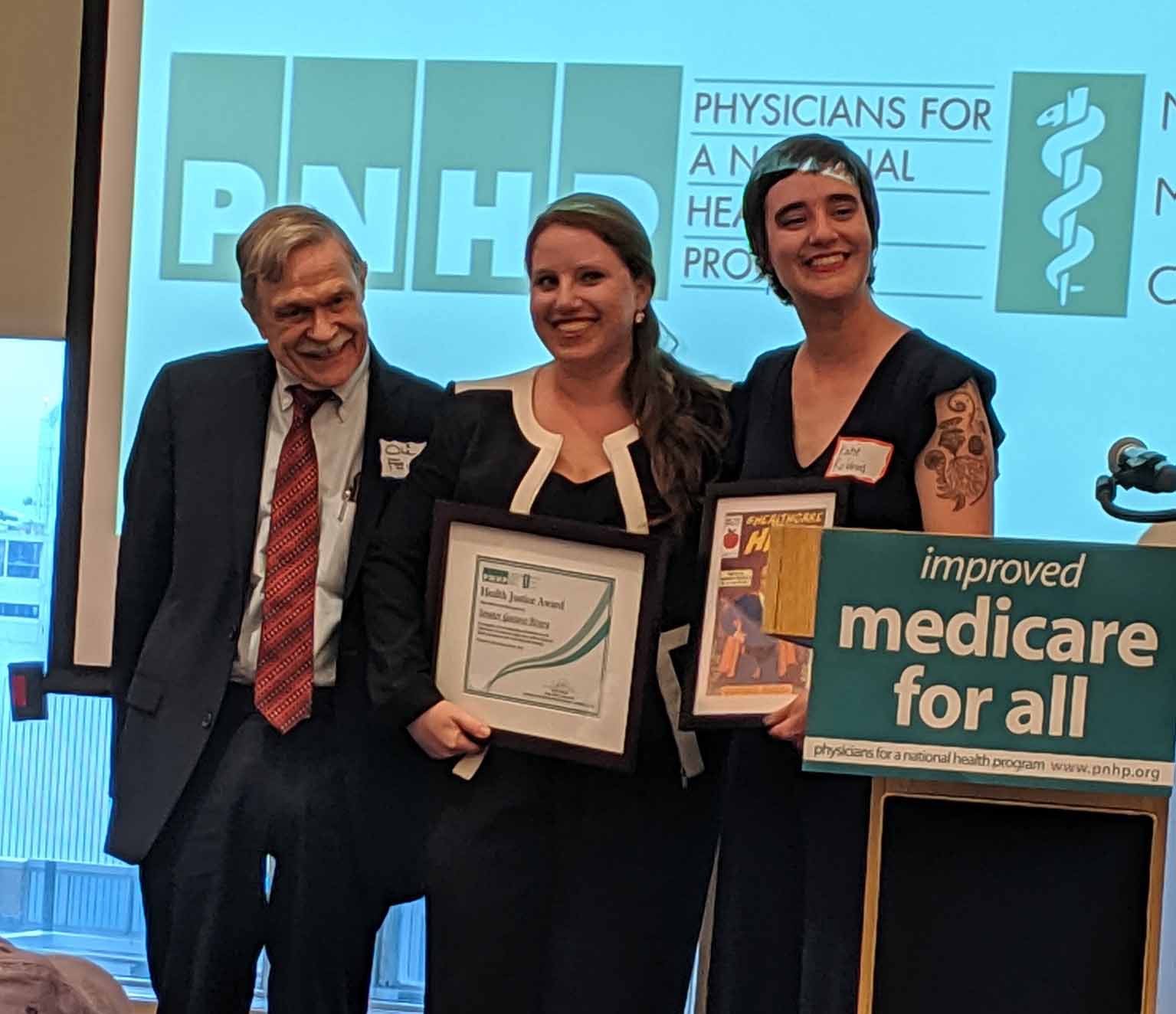 Senator Gustavo Rivera has represented the 33rd NY Senate District of the Bronx since 2010. As Chairman of the New York State Senate Committee on Health, he has been instrumental in helping advance the NYHA through the NY State Senate. In his remarks, the Senator expressed his gratitude for PNHP members “whose commitment and passion in championing the NYHA inspires me every day.”

In explaining his decision to become the bill’s chief sponsor, Senator Rivera express his firm commitment to the idea that “healthcare is a fundamental human right.” The road ahead is challenging, Senator Rivera acknowledged, in part because opponents of the NYHA will do “everything in their power to put an end to our efforts.” But the fight for true single payer is critical, not only because so many go without adequate coverage, but also because of how radically it will address the racial and social inequity built into the current system: “At its core, the NYHA...ensures that all New Yorkers, irrespective of wealth, race, religion, gender, sexual orientation, or immigration status have equal access to the healthcare that they deserve.” This is why he is counting on the continued support and leadership of PNHP - NY Metro and its members in the fight to pass the NYHA.

We thank Sen. Rivera for his acceptance video, and we thank Chief of Staff Annalicia Finol for accepting the award on his behalf. 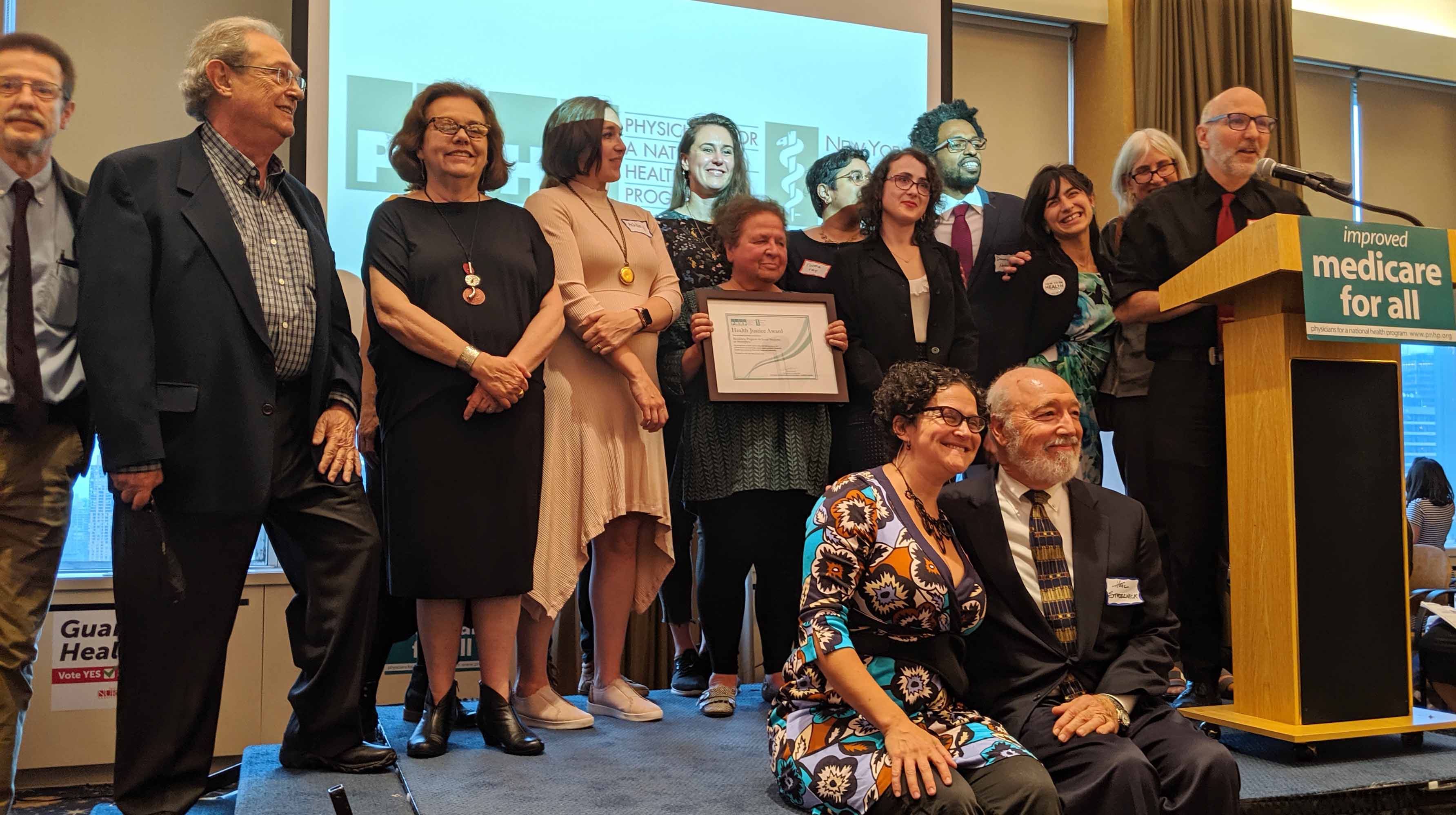 Pictured above are residents, alumni and faculty of RPSM fighting together to make guaranteed care a reality for all of us.

We were inspired by the Residency Program in Social Medicine at Montefiore as the last honoree of the evening. RPSM encapsulates the idea that “the physician is the natural advocate for the poor.” Dr. Dan O’Connell accepted the award on behalf of the program, which has trained more than 800 medical residents since its founding. Dr. Roona Ray, a graduate of the program, explored the historical reasons why the U.S. remains the only advanced nation in the world without guaranteed healthcare, emphasizing the importance of social determinants of health, such as lack of access to care. For the past decade, Montefiore’s social medicine program has trained residents to become not only top physicians, but also advocates for expanding healthcare access to all, including supporting the NYHA. 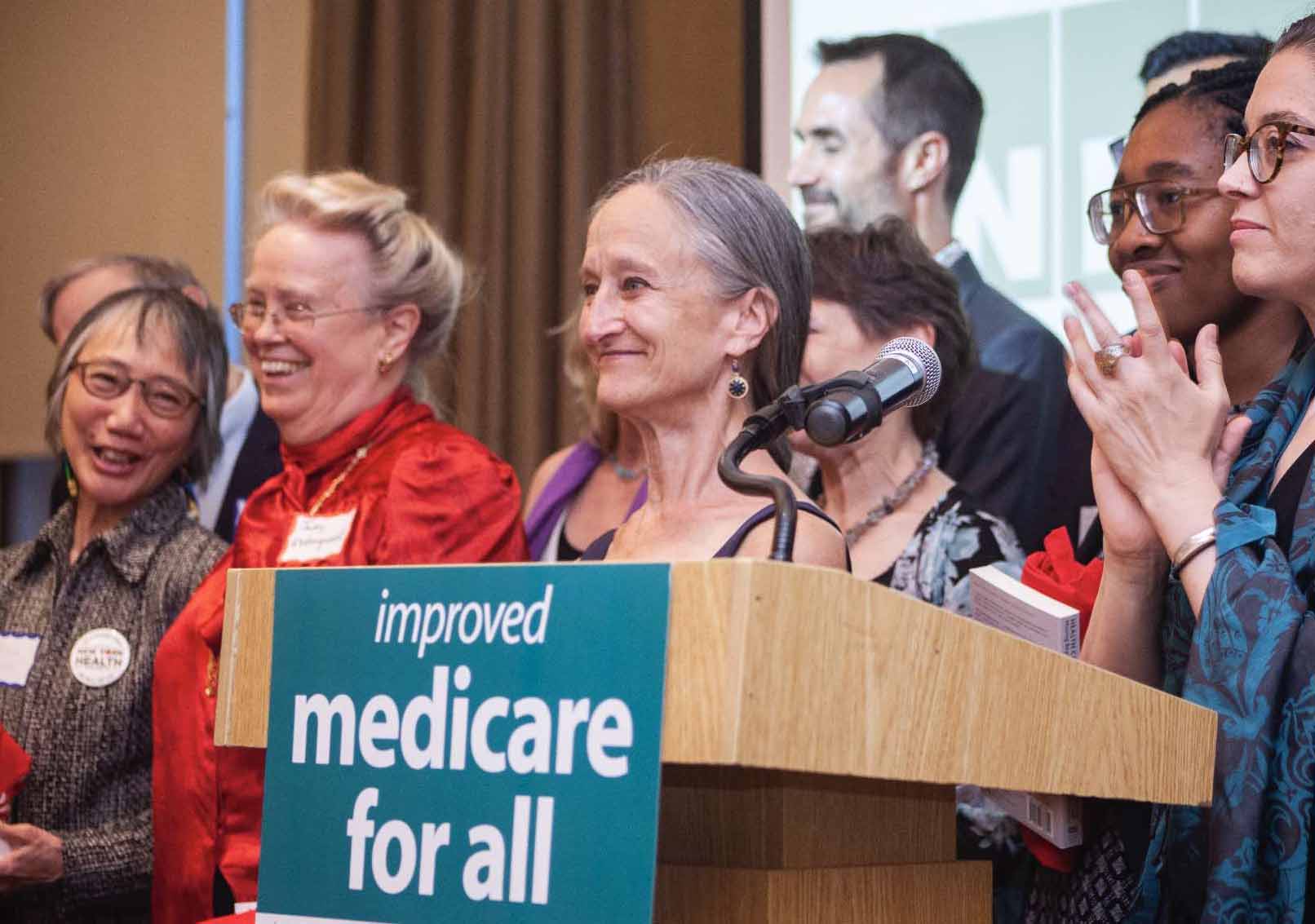 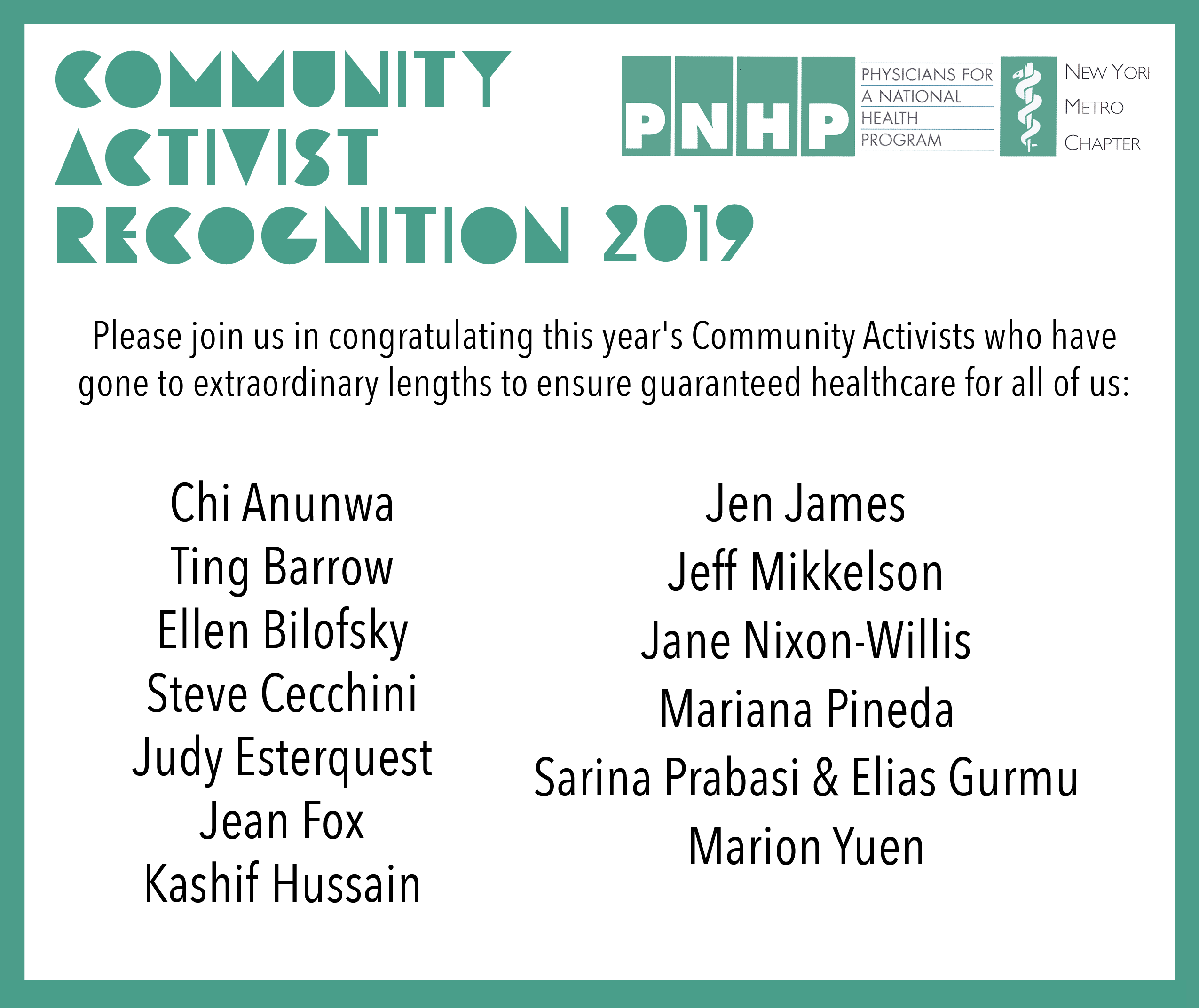 Though we are a physicians-led organization, we are grateful to have non-physicians stand with us. It takes all kinds to build a movement, and we rely on designers, musicians, visual artists, photographers, writers, editors, twitter-ers, farmers, teachers, engineers, and more!

Board Member Ana Djordjevic thanked the evening’s community activist awardees for their unique combination of talents, creativity and insights that have helped make PNHP - NY Metro’s work possible. “For their visions, tenacity and spirit of never giving up, we thank you!”

Chi Anunwa: intrepid healthcare warrior, Democratic Socialists of America South Brooklyn and Socialist Feminist member and city-wide healthcare DSA chair. For her leadership in canvassing and door-knocking efforts and for her stern talking to her Senator (Felder).

Ting shows up, traveling from uptown to Chelsea to Midwood and Albany; taking care of what needs taking care of.  He’s a phone & text banking guru and also great notetaker.

Ellen Bilofsky: fearless leader in south-central Brooklyn; frequent spotter and sharer of healthcare stories and updates in the news;  hawk-eye editor, with predictable attention to detail; quietly and steadfastly keeping things moving. She can put on a kick-ass event and does not wince at the the thankless tasks. A champion of organized labor for single-payer.

Steve Cecchini: amazing organizer, single-payer activist and organic farmer - we know we can trust him because he knows what’s good and what’s good for us! For those wishing to refine their arguments for single payer, please check out Steve’s Facebook feed, which frequently posts astute healthcare observations as well as really great pictures of chickens.

Judy Esterquest: writer extraordinaire; letters to the editor leader and trainer, teacher and inspire-er; sweet smooth talker - even to the opposition; also, best dressed at the hearings in Albany last month!

Jean Fox: the face of the movement! Jean has made many contributions, but the most notable is that she is perhaps the most photographed single-payer activist in the country. Mainstream media outlets frequently run her photo raising a sign that says SINGLE PAYER NOW with a stoic expression that surely drives shivers through any health insurance CEO.

Sarina Prabasi and Elias Gurmu: owners of Buunni Cafe - small business owners and single-payer supporters who are changing the world with their persuasive healthcare advocacy one business at a time, and one cup of coffee at a time.

Kashif Hussain: nobody cares and stands up for their community like this engineer. Combining his district leader campaign and the Campaign for NY Health - Kashif was double trouble for the establishment who thought they had it all figured out! He’s been an important link to Brooklyn’s movers and shakers. For his energy, commitment and looking out for those in need.

And to the Pakistani-American Youth Society who have been a reliable partner these last few years.

Jen James: a major spark all the way from uptown Manhattan (and Democratic Socialists of America) that lit the raging organizing fire in SD17 and beyond; direct action group leader: she can disrupt a meeting of the insurance company like nobody’s business.

Jeff Mikkelson: belongs to and heads up too many organizations to mention here; excellent photographer and and master of the pointed tweet; keeps excellent company and is friends with and thorn in the side of so many legislators. He was a primary motor behind the City Council resolution that voted to support the NYHA.

Mariana Piñeda: Teacher - and we all know how fierce those folks are! Creative and subversive, lives, breathes, dreams, single-payer. Protector of immigrants, the LGBTQIA community and a fierce racial justice warrior; Long Island will not be the same once she is done with it.

Jane Nixon Willis: undaunted health justice defender, and anther teacher. Jane criss-crosses Brooklyn, Long Island, Hudson Valley, at street corners, green markets, and hippie festivals; story-teller and story-collector, she has a way with words - spoken as well as written; gentle yet persistent in all things that are right and just.

Marion Yuen: always on the lookout for opportunities and connections;  visionary and always with a big picture view into the future - not if we win, but when we win; connector-in-chief who also knows that health starts with a garden. 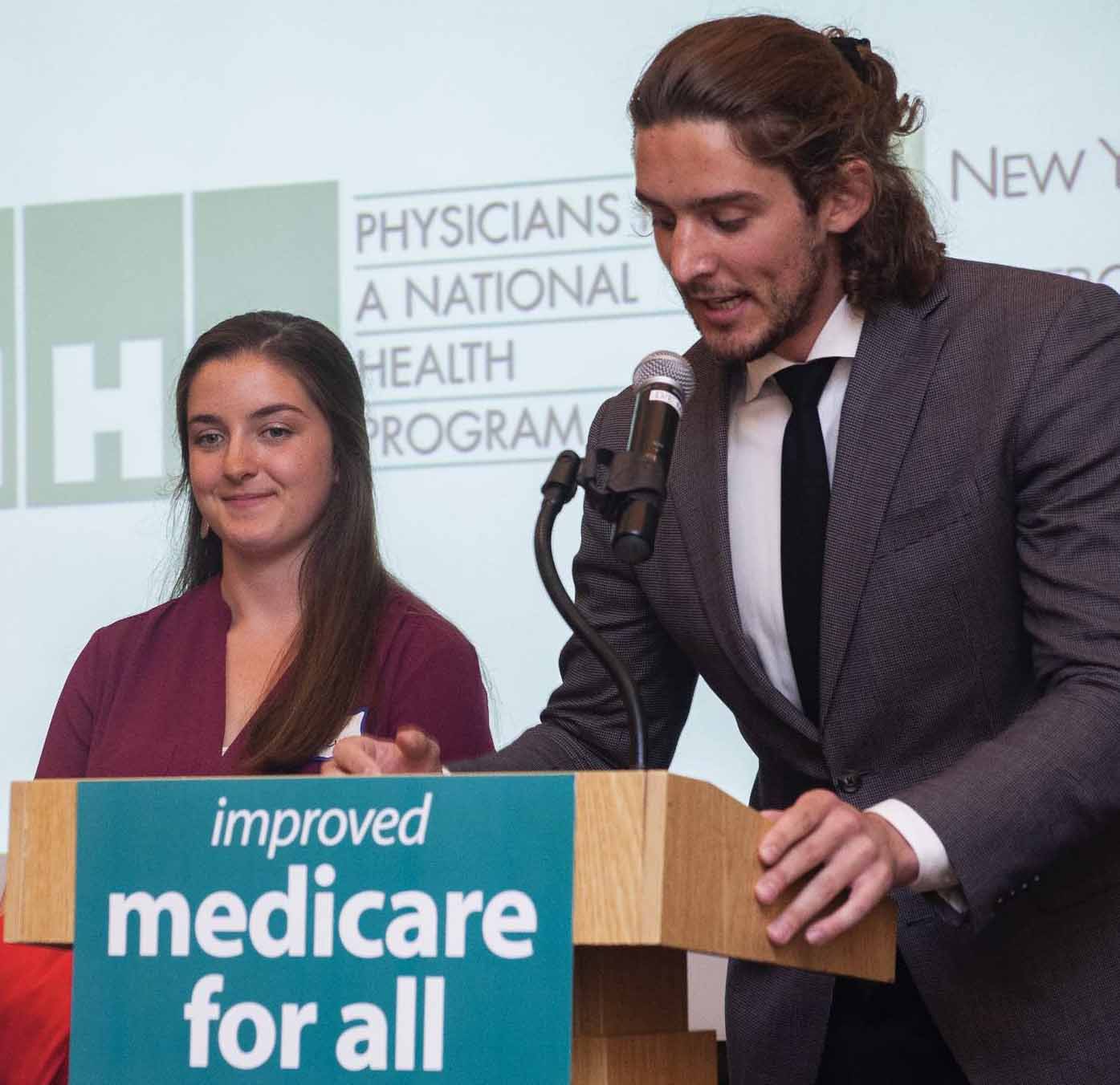 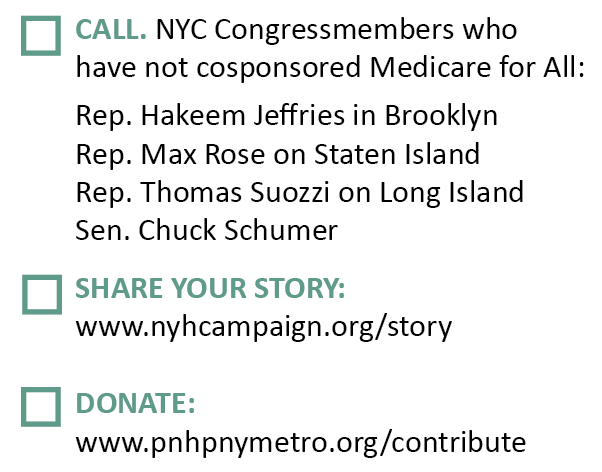 Outgoing and incoming student fellows Alec Feuerbach and Rachel Madley also talked about the importance of medical student organizing in the fight for health justice, saying that “None of us came to medical school to fight insurance companies, or bankrupt our patients. We came because we want to help people! That is why healthcare should be a human right and that is why I think our role as future physicians goes beyond the health clinic.” Your contributions to our chapter support our student fellows and the work they do! Thank you! 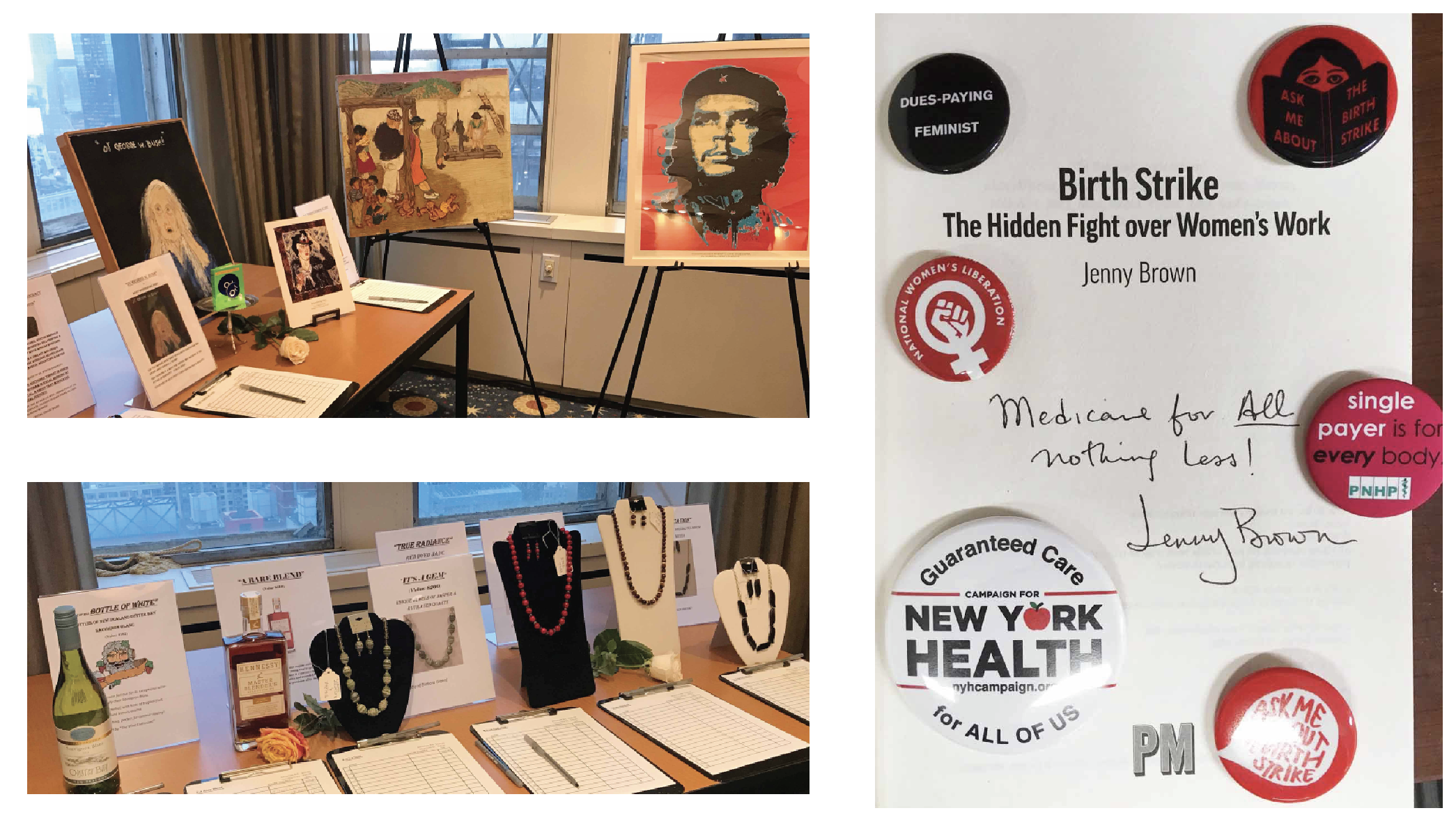 A big great THANK YOU to Board Member Dr. Cheryl Kunis for being the queen of the silent auction & raffle. Also a tremendous thank you to everyone who donated items! Winners went home with tickets to Jazz at Lincoln Center, exquisite dinners, beautiful weekend getaways, paintings, jewels, autographed books, rock climbing and piano lessons, and more!

We are a member-supported organization and cannot do this work without you. Thank you for volunteering, for showing up, for donating. Your contribution, no matter how small or large, goes towards organizing that ranges from production of informational materials, direct action work, work in the community, collaborating with medical students and residents, monthly forums and more! Donate here: www.pnhpnymetro.org/contribute