Posted by Katherine Robbins 3379.40sc on

Mapping the Opposition: Who is Attacking Universal Health Care? 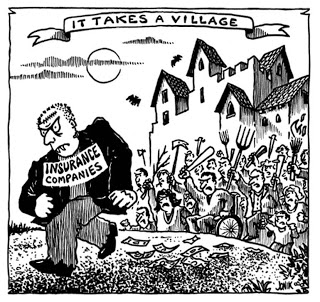 As the movement to win truly universal, public health care shows signs of success, we can expect the opposition to our effort — insurance and pharmaceutical corporations — to pour exorbitant amounts of money into the campaign to defeat us. Here in New York, almost a majority of the legislature is on record supporting the New York Health Act —the universal single-payer bill in New York State. Not surprisingly, groups like Reclaim New York are funding anti-New York Health Act mailers in key Senate districts to undermine the effort.

Join PNHP NY Metro for a discussion with public accountability organization, LittleSis, on how the opposition to truly universal, single-payer health care is mobilizing. Learn who funds these efforts, and how they profit from the status quo.  In what is a David and Goliath battle, this free forum will address how we will build the movement to take on these corporations and win the right to health care.

On filming: We are unable to live stream from the forum, but we will post a video for public viewing after the forum. You can view video from past forums in the archives.